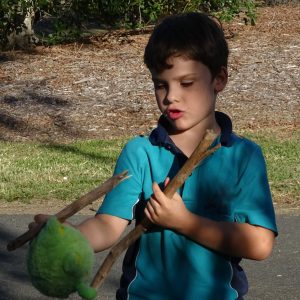 Mr 2 rested, Mr 6 and Mr 8 were joined by two lively Miss 5’s and another Mr 8 and Fergus the Frog. Fergus was visiting from Mr 6’s classroom for the weekend.

It was a very different walk from the morning meander.
Mr 6 and Mr 8 were very keen to show their favourite places to their friends and ran to show these places. The salt marshes were no longer dried out but moist and muddy. Still the boys were able to lift large flakes of the surface off “Like skin” generating awed gasps from their friends.

Pebbles on the gravel paths were thrown. Miss 5 threw them as she spun about watching the resulting arc of stones. The Mr 8’s explored the sounds made as the pebbles landed on the path, the dirt on the side of the path and the puddle beside that. “It’s like music,” one said, “Listen.”

Miss five also explored stone music at the lookout point, dropping the stones onto the path and through it’s holes, into the water.

As we looked out to admire the view to the islands, Miss 5 spotted a brilliant red crab perched on a fallen log. All were amazed when the crab scuttled around the side of the log into the waves and later moved back out onto the log. 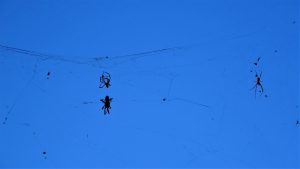 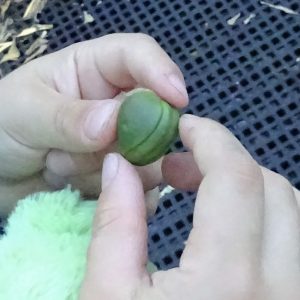 The boys were reminded to look at the webs the golden orb weavers had spun high above the path. They curiously examined the web that had been spun from the corner of the path, and the spider that ruled there. When we came to a web that stretched from the path to a tree, we talked about the strength of the web. In turn, the children tested the strength of the support strands, they stretched for ages, before they snapped. After the first one or two strands, we noticed the web was no longer so taut. And Mr 6 began to get quite concerned. “Stop” he said, “Imagine if that were your home and an alien came and destroyed it. You wouldn’t like that.” He is exploring commonalities between his own life and the life of this much smaller creature.

Mr 6 found the same egg like seeds that Mr 2 had found during our morning walk.  As he peeled back the outside edge,

he exclaimed “It’s like the beans we sometimes have at home.”  There were many more of these seeds near the end of the walk, the Misses 5 began a collection. They noticed that some were larger than others.  We wondered why.